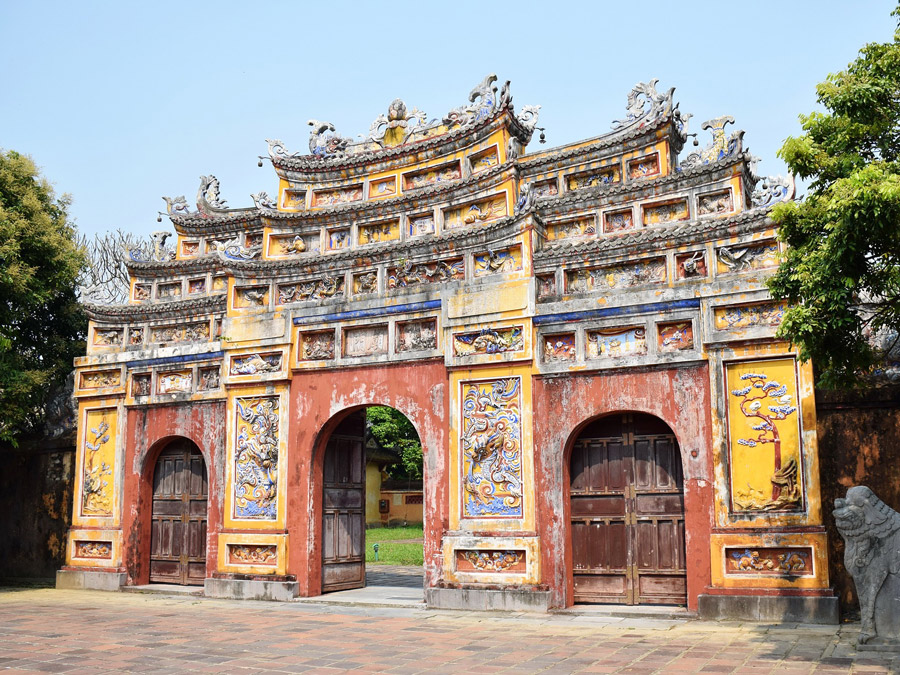 Hue is a historical city located in Central Vietnam. The place used to be the capital city of the 16th Century Dang Trong Kingdom.  Further, it gained importance during the rule of the Nguyen Dynasty that remained in power until 1945. The city is home to monumental shrines and palaces that add to the rich heritage of the place. Every two year, a grand festival is held across 40 venues in the city. Thousands of people participate in the event that lasts for a week. During our brief stay in the city we had been to several sites that primarily include the places listed below:

The Citadel that houses the Imperial City was built in the 19th century. The entire walled citadel spans over a vast area with a perimeter of around 10 Kilometers.  The entire area is surrounded by a moat and fortified ramparts. There are 6 main gates that surround the Imperial City within which lies the Purple Forbidden city accessible via 4 main gates. Next, there is an outer court followed by temples, an inner court, a garden, and 2 pavilions. It took us an entire day to tour the place and it was quite an experience. The entry fee was 150,000 VND per person.

After a long historic tour, we had a relaxing time at Bach Ma National Park located at Thua Thien Hue. The protected evergreen forest area is a popular summer retreat with beautiful trekking trails. There are several pools and waterfalls in this area that serve as a treat for sightseers. The place is a major tourist destination in the city. Tourists visiting from foreign countries often hire local guides to help them with their day trip.

Located along the Kim Long Road, Thien Mu Pagoda is one of the most-visited religious destinations in the city. To visit the spot we had to take a small boat trip. The place was quite serene and beautiful. The 7-story pagoda was built in 1601 and there are several folklores associated with the origin of this Buddhist place of worship. The views from the hilly terrain are also worth seeing.